A club for fans of Elinor M. Brent-Dyer's Chalet School

The life and times of Elinor M. Brent-Dyer

If you have ever wondered about the person who wrote over a hundred books, including the 58 Chalet titles, wonder no more!

Elinor Brent-Dyer's own background differed greatly from those of her fictional characters, many of whom came from gracious homes and large, happily united families. She was originally from the industrial north-east of England, and grew up there in a modest house, without garden or inside sanitation.

From an early age, Elinor had shown ability as a writer, and among her 101 published books are stories of schools other than the Chalet School. There are also family, historical, adventure and animal stories; a cookery book, and four educational geography-readers. Elinor was even known to write plays on occasion, some of which were performed at local theatres, and numerous unpublished poems.

Elinor was renowned for untidiness, and was considered eccentric in dress, appearance and manner. One old friend described her as 'not at all pretty, but (with) a very mobile and expressive countenance'. Another as 'dottily humorous', 'a very kind and generous woman', 'a fount of good common sense'. 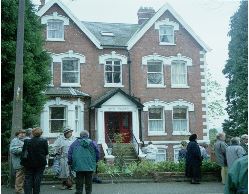 When was Elinor Brent-Dyer born?

Did Elinor Brent-Dyer go to a school like the Chalet School?

When did she die? 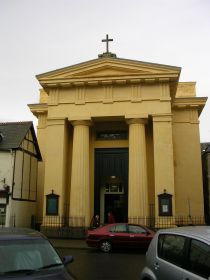 The church in Hereford where Elinor worshipped

J91 has been proofread and will be sent to the printers shortly.

For those members who live in the UK, please wait a week before contacting the membership secretary

For members outside the UK but in Europe - 3-4 weeks

The deadlines for submitting articles to the journals are: